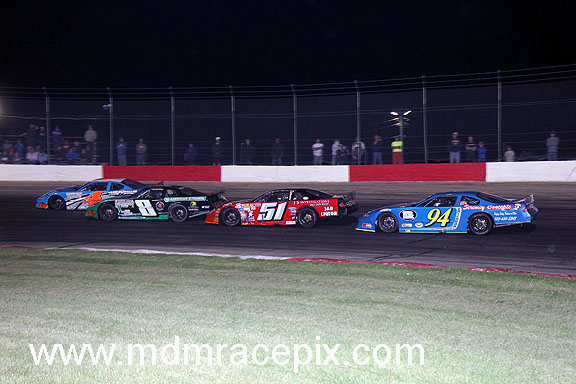 JEFFERSON, WI (Tuesday, August 29, 2017)           As kids head back to school and the temps begin to cool, it can only mean one thing…..racing season is drawing to a close in Wisconsin. That’s the case at Jefferson Speedway as only a couple weeks remain in the chase to crown new champions. With just two points nights left in the season, the battle for the Late Model championship is red hot. After current point leader, Dale Nottestad of Cambridge, had some misfortune last Saturday night; his closest competitors in the standings have closed in looking to steal his lead.

Shaun Scheel of Late Mills held the top spot in the standings until mid-July. Nottestad took the lead away, but Scheel has remained close by in second. Four-time track champion, Jason Erickson of Fort Atkinson, has been lurking in the top five all season and currently sits in third.

All three drivers remain in contention for the championship with Scheel sitting a mere 13 points back from Nottestad. Shaun is heading into the last two weeks no differently than any other week. The Scheel Racing pilot says, “We as a team are approaching the last two weeks like they are any other weeks of the season. Trying to bring a car to the track that we feel we can win with and let the rest take care of itself.”

Erickson is 45 points out from the leader. So how is the Yelk Motorsports team approaching the final weeks of the chase? “Just going to do what we’ve been doing all year. Race smart, try to stay out of trouble and take the best finish we can get that night. We’ve put a good car on the track each week and how the rest falls is sometimes out of your hands,” says Erickson.

As for Nottestad, he continues to subscribe to the same approach he has each week of the season. “I’m going into the last 2 nights just like I do any other night, we go to win, and wins will take care of the points.”

Scheel is looking to score his first Late Model crown at Wisconsin’s Action Track. Scheel owns a Bandit championship from 2005, but has yet to secure a title in the premier division at Jefferson Speedway. He’s hoping this is the year. “Winning a Late Model championship has been something I’ve always dreamed about,” stated Scheel. “It would be an accomplishment where I feel like all of the hard work and late nights that my dad and I put in the shop every night are finally paying off. Along with the rest of my team that help make this opportunity happen.”

Erickson has four Late Model titles under his belt, the last coming in 2011. No driver has ever won five championships in the division, but Erickson and his team have themselves in position to set that mark. “5th title…no matter which way it goes I will be satisfied,” admits Erickson. “It’s been a struggle the last few years for us…both on and off the track. Just to put us in position means a lot. If we finish it off and win, that would be awesome. If we don’t I would be happy knowing we gave it our best shot.”

The Clifcorn Motorsports team, with Nottestad behind the wheel, is the defending champion. They’ve won three of the last four crowns at the quarter mile speed plant and look to keep the momentum going. Another championship would tie Nottestad with Erickson for most titles won. “Winning a 4th would be a huge deal, especially since it would be four of the last five, and the year I didn’t win of those 5 we didn’t run full time that year.  It would be cool to tie Jason at four championships,” says Nottestad. But they cling to a small lead in the standings and must perform well in the next two weeks to close out the job.

The title chase continues this Saturday night with Serenity Concepts Night at the Races. All the action kicks off with time trials at 5pm and racing at 7pm. Don’t miss a lap as the battles are intense on the track and in the standings! Who will stake their claim to the 2017 title? Come and see the battles unfold right in front of your eyes at Jefferson Speedway!