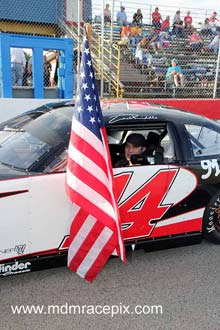 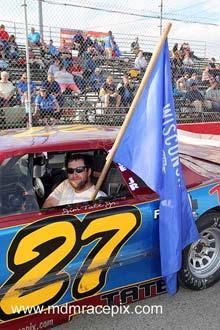 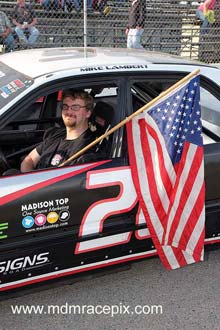 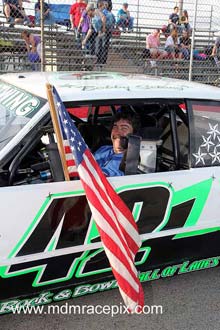 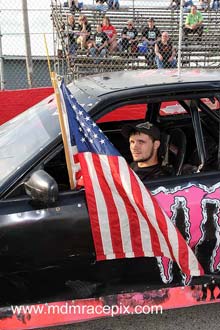 JEFFERSON, WI (Saturday, June 01, 2013) Jerry Eckhardt of Johnson Creek scored a popular victory at Wisconsin’s Action Track on Saturday night. Eckhardt got to the front of the field just after the halfway point of the Stoddard’s Country Meat Market and Catering 50 lap Late Model feature and hung on to get the win.

Tyler Peterson and Craig Phillips paced the field to green with Peterson taking the early lead through turns one and two on the opening lap. Phillips fell in line behind Peterson with Eckhardt riding in third. Peterson began to stretch his advantage while Eckhardt started to challenge Phillips for second. By lap 15, the leaders were spread out with Peterson showing the way and Eckhardt up to second. Around lap 20, Eckhardt started to reel in Peterson at the front of the pack. Eckhardt closed in lap after lap until he found himself on the rear bumper of Peterson by lap 27. Eckhardt took a peek to the inside, drawing even for the top spot on lap 28. Eckhardt inched forward until finally clearing for the point on lap 32. Two caution periods followed with Eckhardt as the new leader. On lap 36, Ryan Goldade made his way around Peterson to claim second with Kyle Jarlsberg in tow for third. Goldade began searching for a way to get by Eckhardt, but Eckhardt held him off lap after lap. One final caution slowed the pace on lap 45 setting up a five lap shootout to the finish. But Eckhardt held serve over the final circuits to see the checkers first and get the win. Goldade settled for second followed by Jarlsberg, Casey Johnson and Zack Riddle.

In Sportsman action, Steven Sauer of Waterloo grabbed the lead and held off a hard charging Jim Tate Jr to claim the 25 lap feature. Joe DeCubellis led early from the pole with Mark Deporter up to second. Deporter quickly made his move for the lead on lap three as he slid under DeCubellis. Deporter cleared for first on lap five as Will Rece followed under DeCubellis for second and Sauer moved into third. Sauer dropped to the low side and charged under Rece, stealing second and setting his sights on Deporter at the front. Meanwhile Tate was also slicing his way through the top five into third behind Sauer. On lap 14, Sauer got a great run on the bottom of the speedway as he pulled alongside Deporter down the back stretch. A lap later, Sauer was on the point with Tate in his tracks for second. Tate pressured Sauer over the final 10 laps, but Sauer was up to the challenge as he hung to get the win. Tate was second with Deporter third. Seth Lootans and Jason Thoma rounded out the top five.

Seth Reamer of Waupun picked up his second feature win of the season by capturing the 20 lap International feature event. Keith Bell led lap one with Joe Cross in second. Cross moved under Bell on lap two, clearing for the lead a lap later and bringing Reamer along for third. Reamer began to pressure Cross just as the sole caution of the race appeared on lap six. As racing resumed, Reamer got right back to work on the low side of Cross for the lead. Lap after lap, Reamer kept chipping away at the lead as Cross tried to hang on in the outside groove. The duo raced wheel to wheel under the white flag with Jamie Shelley watching from third. Reamer gained the advantage as they flew down the back stretch one final time. At the stripe, Reamer owned the slight advantage to get the win with Cross settling for second. Shelley finished third followed by Bell and Neil Higgins.

Bobby Selsing Jr of Edgerton charged to the front of the field and drove off to win the 25 lap Hobby Stock feature. Jim Wolf and Crystal O’Gorman led the field to green with Wolf taking the initial lead on lap one. Jeff LeFave followed into second with Dustin Ward in tow for third. LeFave quickly drove to the outside and around Wolf on lap three as Ward stayed right behind to take over second. Ward wasted little time as he made his move to the high side of LeFave as Selsing motored up to join the battle. Ward and Selsing emerged side by side on lap five as Selsing nosed his mount into the lead as the caution waved to slow the action. Selsing restarted as the leader with Ward in his rear view mirror. James Helmer made a late race charge to second, but Selsing hung on to get the win. Ward finished third with Tony Ciano and Lucas Buckingham completing the top five.

Chris Gottschalk of Jefferson set the pace in qualifying and capped off the night by winning the 20 lap Road Warrior main event. Jared Larson led lap one at the stripe with Mike Storkson still at his side. Larson took possession of the lead on lap three with Tim Ellis in tow for second. Ellis drove to the outside as he motored into the lead as Chad Olds followed into second. On lap seven, Olds dove under Ellis looking to lead, but Ellis held off his advances to maintain the top spot. Meanwhile, Gottschalk made his way to third behind Olds. Gottschalk moved past Olds for second on lap ten and quickly drove up alongside Ellis looking to lead. A lap later, Gottschalk was out front with Olds following into second. Gottschalk began to pull away from the pack while Rob Lange moved up to challenge Olds for second. Lange made the pass for second on lap 13, but Gottschalk was already well on his way to seeing the checkers first. Lange was second followed by Olds, Bill Sweeney and Ellis.

Janesville’s Derek Dixon picked up the win in the 20 lap Bandit feature event. Tyler Deporter and Josh Rusch paced the field to green with Deporter taking command of the lead on lap one. Rusch dropped into second with Josh Lenz riding in third. Deporter began to stretch the lead while Rusch tried to hang on to second. A caution on lap six erased Deporter’s advantage with Rusch still in second. As racing resumed, Dixon charged to the high side as he slid up alongside Rusch on lap eight. A lap later, Dixon was wheel to wheel with Deporter fighting for the lead. Deporter held him off to reclaim the lead. On lap 13, Dixon got a good run exiting turn two, this time on the inside of Deporter. Dixon cleared for the lead one corner later as he drove off to get the win. Nick Schmidt finished second followed by Keith Erickson, Devon Dixon and Brandon DeLacy.

Next Saturday, June 8, is full program sponsored by Brown Heating and Air Conditioning. Time trials begin at 5pm with racing at 7pm sharp. Jefferson Speedway is located halfway between Jefferson and Cambridge on Hwy 18. Please visit www.jeffersonspeedway.com for more information.