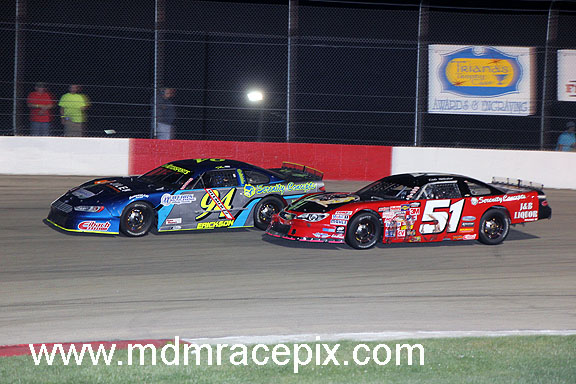 JEFFERSON, WI (Saturday, July 16, 2016) Fort Atkinson’s Jason Erickson charged through the field from his seventh row starting position to claim the Teamster’s Local 200 Late Model 50 lap feature event. The win ends a long drought for the Yelk Motorsports team in the win column. Meanwhile, point leader Dale Nottestad maintained his streak of top two finishes, a feat he has accomplished every week of the 2016 racing season.

Kyle Smith and Kody Hubred paced the field of 18 drivers to the drop of the green flag as they battled wheel to wheel for control. Hubred gained the advantage and cleared for the point on lap two with Smith falling back to second. On lap seven, Tyler Peterson cleared for third and began to challenge Smith for the second spot. Peterson claimed the runner up position on lap 12 as Dylan Schuyler moved up to challenge Smith for third. Schuyler made the pass for third and entered into a battle for second with Peterson on lap 13. The duo raced hard until the first of three cautions waved at the halfway point of the race. The yellow erased the large lead that Hubred was enjoying as the field closed up behind him for the restart. As racing resumed, Erickson began to work over Schuyler for third. As they raced side by side, they pulled up behind Peterson who was running in second. Erickson slid past Schuyler and drew even with Peterson on lap 31. After a brief battle, Erickson cleared for second with Dale Nottestad now following in his tracks for third. Nottestad began to apply pressure to Erickson until the second yellow waved on lap 37. Hubred led the field back to green with Erickson close by in second and Nottestad riding in third. As racing resumed, Erickson quickly went to work on Hubred, who had led from the beginning of the race. With ten laps remaining, Erickson got a run on the low side of Hubred, pulling up next to the leader. The pair of competitors raced door to door over the next five laps with Erickson slowing inching forward. On lap 45, Erickson cleared for the lead with Nottestad trying to follow past Hubred. Nottestad cleared Hubred with Schuyler trying to follow. But contact between Schuyler and Hubred resulted in Hubred spinning in turns one and two to force the final yellow flag of the race. This time, Erickson restarted out front with Nottestad filling his rear view mirror for the final five lap shootout. But Erickson kept Nottestad at bay over the closing circuits as he crossed under the checkers first to score the win. Nottestad finished second followed by Michael Grueneberg, Shaun Scheel and Stephen Scheel.

Tony Ciano of Janesville claimed the win in the 30 lap Sportsman feature event. Ed Jackson and Dan Schmidt opened up the action as they battled for the lead from the front row. Schmidt eventually took over sole possession of the point on lap five with Jim Tate Jr trying to pull alongside for the lead. Tate drew even with Schmidt on lap six, easing into the lead as they raced off turn four. Ciano followed past Schmidt into second on lap seven with Bobby Selsing in tow for third. Lap 14 saw the first of two cautions. Tate led the field back to green with Ciano in second and Selsing still in third. On lap 18, Ciano got a run under Tate as they raced off of turn two. Ciano pulled even with Tate as they raced wheel to wheel for the lead. Ciano completed the pass on lap 20 with Selsing continuing to follow Ciano to the front. Selsing began to apply heavy pressure to the new leader with Ciano holding him off. The race was slowed by one final caution with three laps remaining, but Ciano remained in control to grab the checkers and the win. Selsing settled for second followed by Jay Kalbus, Robert Hansberry Jr and Mark Deporter.

In International action, it was John Handeland of Belleville picking up the 20 lap feature victory. Scott Crawford led early with Jason Uttech, Jamie Kohn and Merek Pankow racing three wide for second behind him. Kohn emerged with the second position on lap two and pulled up behind Crawford looking to lead. Kohn drove under Crawford on lap three, clearing for the top spot a lap later.  A sole caution slowed the pace on lap five with Kohn and Crawford leading the field back to green on the restart. Kohn returned to the lead while Crawford fell off the pace allowing Uttech and Handeland to move up into a battle for second. Handeland took the spot on lap seven and quickly pulled up behind Kohn. Handeland drove to the low side of the leader on lap ten, clearing for the lead down the backstretch on lap 12. Handeland began to stretch his advantage while Kohn tried to hold off Mark English for second. English for the second spot while Handeland cruised to the checkers to get the win. Lambert came home ahead of English to finish second. Seth Reamer was fourth with Kohn in fifth.

Waterloo’s Dustin Ward returned one week after mechanical difficulties to pick up the win in the 25 lap Hobby Stock main event. Jon Benninger and Brandon DeLacy battled for control on lap one with Chuck Egli watching from third. On lap two, Egli made it a three way fight for first as they raced three wide into turn one. Egli emerged with the lead just before the yellow flag waved on lap four. As racing resumed, Ward and Cody Buchs entered into a battle for third with Egli still showing the way out front and Benninger in second. Ward grabbed the third spot on lap six and quickly drew even with Benninger for second. Ward moved into the runner up position on lap seven with Buchs following into third. Ward charged up behind Egli, moving to the bottom of the racing surface and passing for the lead on lap 16. Ward immediately began to pull away while Egli and Buchs battled for second behind him. Ward cruised to the checkers to score the win with Buchs claimed second over Egli. Jared Vike was fourth followed by Lucas Buckingham in fifth.

Chris Gottschalk of Fort Atkinson was the winner of the 15 lap Road Warrior feature event. Jim Wolf led early from the pole with Bill Sweeney, Bill Reynolds and Mark Dewey racing for second. Sweeney and Reynolds continued forward side by side as they drove under Wolf. Reynolds emerged with the lead on lap four with Craig Henning up to battle Sweeney for second. Henning moved into second on lap five with Gottschalk in tow for third. Gottschalk immediately went to work on Henning for second, pulling alongside and making the pass on lap seven. Gottschalk continued forward as he launched his bid for the lead with Reynolds in front of him. Gottschalk drew even with Reynolds on lap 11 as they raced side by side. Gottschalk eventually cleared for the top spot with only two laps to go. Gottschalk stayed out front all the way to the checkers with Reynolds following across the line in second. Henning was third followed by Kenny Storkson and Sweeney.

Jeremy Bredeson made a late race pass to score the win in the 15 lap Bandit feature event. Cade Watters took the early lead with DJ Hill riding in second. On lap three, Hill got under Watters to take over the top spot with Ross LaMont following into second. On lap five, Tyler Deporter got past LaMont to claim the second spot and pull up behind Hill at the front. Bredeson followed into third as the leaders lined up single file. On lap ten, Bredeson decided to move to the high side as he pulled up alongside Deporter for second. A lap later, Bredeson continued forward next to Hill at the front. Bredeson took over the lead with three laps to go while Deporter went to work under Hill for second. Bredeson drove off to the checkers to pick up the win. Deporter was second followed by Chad Olds, Hill and Ryan Ostenson.

Next Friday, July 22, is another installment of Jefferson Speedway Track Attack beginning at 7pm. Saturday, July 23, is a full program of racing sponsored by Triana’s Trophy Case. Time trials begin at 5pm with racing at 7pm. Jefferson Speedway is located halfway between Jefferson and Cambridge on Hwy 18. Please visit www.jeffersonspeedway.com for more information.