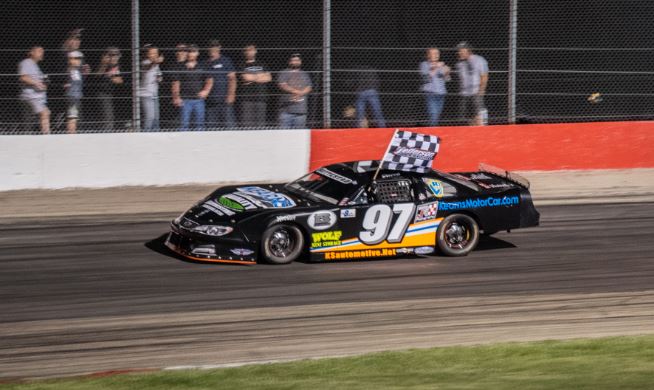 CAMBRIDGE, WI (Saturday, May 22, 2021)             The second week of racing was rained out on May 15, bringing the ladies and gentlemen back to the track for a full night of racing at Wisconsin’s Action Track on May 22.  Six divisions of racing packed the program, highlighted by the Fort Atkinson Small Engines 50 lap Late Model main event. When it was over, third generation driver, Jacob Nottestad, stood victorious after taking the lead on lap 14.

Rookie Ryan Weyer and Luke Westenberg  paced the Clear View Tree Care Late Model feature to green with Weyer jumping on the early lead. Shaun Scheel and Stephen Scheel followed behind the two with Shaun pouncing into second. The top 3 positions remained Weyer, Shaun, and Westenberg for several laps. On lap 9 the first of 4 cautions would happen when Michael Gruenberg, Dale Nottestad and Westenberg got involved with each other in turn one. The field would reline up with those 3 in the rear of the field, the race would restart with Weyer and Shaun leading. On lap 11 the second caution would come out for Gruenberg for a mishap of his hood flying up and making him lose sight of the track. Shaun Scheel would take the lead for 5 laps while Riley Stenjem and Jacob Nottestad were on the move. With Stenjem in second behind Scheel and J. Nottestad not far behind, on lap 14 Nottestad would take the lead with Scheel in second and Stenjem in third. The battle between the top positions gave Nottestad plenty of time to gain a large lead. On lap 17 Stenjem overtook Scheel for second where he would remain the rest of the race. On lap 20 Weyer spun alone causing the third caution of the race. The race restart was with J. Nottestad and Stenjem. On lap 29, the final caution would be brought out by Weyer spinning again and this time into another driver. The race restarted single file with J. Nottestad at the point. On lap 31 D. Nottestad would finally make it to the top 5 and take the 5th position. As laps would continue to tick away, D. Nottestad would continue his pursuit to the top. On lap 36, he moved to the fourth position overtaking Seth Reamer. On lap 41 & 42 he fought Shaun Scheel for the 3rd position finally taking it on lap 43 where he remain until the checker. The race ended single file for the front runners, J. Nottestad, Stenjem, D. Nottestad, Shaun Scheel and Reamer for the top 5.

The Serenity Concepts sportsman feature was claimed by Mark Deporter after a sea saw battle. It started with an almost immediate caution on lap 2. This would be the only caution of the race. It involved Tyler Deporter, Tony Ciano and Tytus Hegestad. Pacing the field on the restart would be Bobby Selsing Jr. and Jason Thoma. With the pole position, Selsing Jr. was able to take the lead. This gave way from M. Deporter who started in 9th position to get to third because of the double file restart after picking his lane. M. Deporter would pass Thoma on lap 6 for second and then continue the hunt on Selsing Jr. The sea saw battle began on lap 20/ 21 when Deporter would make it halfway up Selsing door. Finally on lap 22, M. Deporter would take the lead from Selsing Jr. But Selsing didn’t want second and passed M. Deporter back on lap 23. M. Deporter crossed the start/ finish line again ahead of Selsing Jr. on lap 25 they raced door handle to door handle. But it was finally on lap 25 M. Deporter took the lead the raced to victory lane. Top five finishers: M. Deporter, Selsing Jr. Chris Jones, Tim Coley and Thoma.

James Junget collects the win for the 20 lap Wolff Pack Apparel International feature. Timothy Higgins and Josh Rusch paced the field and after the first lap was complete the first caution was brought out by Rusch, Jason UTech and Carson Strese. The race restarted and Rusch leading the first 4 laps. Mark Dewey made a run for the front and took over the lead on lap 5 with James Junget in a fast chase to the front, only allowing Dewey the lone lap lead. Junget continued to lead the rest of the race. Weston Strese finished second, followed by Jason Uttech, Neil Higgins and finishing your top five T. Higgins.

The last event of the night was the road warrior feature, sponsored by Marc’s Garage of Cambridge. 6 Cars started, with the 15 of Aaron Genske taking the lead. He led for 1, lap when AJ Acardi in the 14 took over and led the rest of the race to win. The real action was midway through the feature between the 17 of Kevin “Sonic” Zimmerman and 16 “Mr. Excitement” Rodger Stevenson. They battled back and forth for 3-4 laps with Zimmerman finally finishing in 3rd ahead of Stevenson. Finishing order, Acardi, Matthew Thoma, Zimmerman, Stevenson, Garrett Meister and Genske.

Bandolero feature started with 14 cars. Alex Hartwig, captured the 15 lap CR Custom Construction Bandolero feature race for the second race of the season. 7D Easton Riedner grabbed the hole shot and took the lead on the first lap. He led for 4 laps and was overtaken by 901 Alex Hartwig. On lap 11 the caution was brought out by the 5 of Penn Sauter. With 4 laps to go, Hartwig finished with the win, followed by Cohen Henze, Riedner, Avery Linnerud, and Lincoln Cain.

Next Saturday, May 29, is a special program with a “Salute to the Troops” the ARCA Midwest Series brings the super late models to the track. Time trials at 5pm and racing at 7pm. On Sunday, May 30th, Round One of the Tournament of Destruction with fireworks and racing starting at 7pm. Jefferson Speedway is located halfway between Jefferson and Cambridge on Hwy 18. Please visit jeffersonspeedway.com for more information.