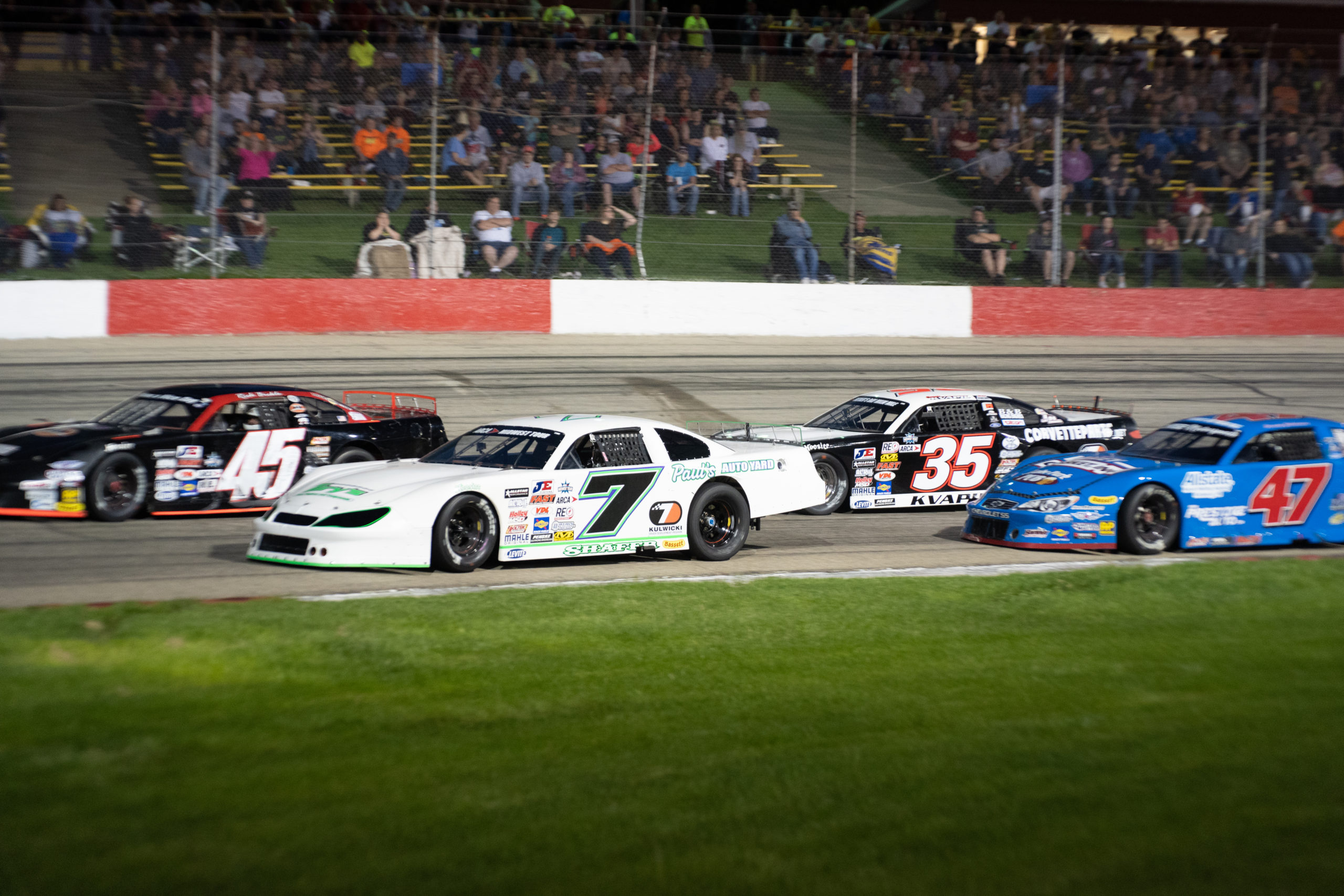 Three drivers have won the last nine Track Championships at ‘Wisconsin’s Action Track’.  While Casey Johnson, who won during the Tour’s most recent visit to Jefferson in 2019, is the two-time defending ARCA Midwest Tour Champion, based on the strength of his three Track Titles at Jefferson Speedway coupled with his record six Wisconsin State Championships at the quarter mile paved oval, he has to be counted amongst the local top guns.  Having won back-to-back Championships in 2019 and 2020, Shaun Scheel will make his second ever Super Late Model start and his first on his home track.  Scheel is the only driver not named Johnson or Nottestad to add his name to the Wisconsin State Championship list over the past nine years, completing the feat in 2015.  Dale Nottestad, a two time State Champion is the current Jefferson and Big 8 Series point leader, on the strength of his opening event feature wins.  The five-time Track Champion will wheel his Super Late Model on Saturday night for just the third time in 2021.

Way back in 2008 Jonathan Eilen hauled the winnings home to Minnesota from Jefferson Speedway.  The 2012 Midwest Tour Champion is once again at the top of his game heading into Saturday night’s Showdown.  Likewise, four-time Midwest Tour Champion Ty Majeski claimed top honors in 2017, one of his Tour leading 25 all-time wins.  Having won the 2020 Snowball Derby in Florida, Majeski is back in Wisconsin between his NASCAR Truck Series endeavors hunting for trophies.  Meanwhile 2018 Tour Champ Dalton Zehr had what was perhaps the fastest car in the closing stages of the Joe Shear Classic earlier this month.  The veteran driver settled for third on the podium and appears to have that program running in top order.

The driver winning the Joe Shear Classic earlier this month was Rich Bickle, Jr.  Now Bickle, who is set to retire at year’s end will make what is likely his last start at Jefferson on Saturday night, the track where he started his racing career and his father, Rich Bickle, Sr was the 1972 Track Champion.  Bickle did not slow down after his first career Midwest Tour win, he followed it up with a win on opening day at Slinger Super Speedway.  Another Touring Star with a hot hand is Paul Shafer, Jr, the 2013 Illiana Motor Speedway and 2020 Grundy County Speedway Champion.  Shafer clicked off three straight Super Late Model victories at Grundy to start the season, only to be edged at the line last Friday night.  Shafer’s first career Tour win came at Jefferson in 2018.

It was Austin Nason setting the fastest qualifying lap during the Tour’s last visit to Jefferson in 2019.  Nason has won three Tour events at three tracks, Madison, Rockford and The Milwaukee Mile.  The second generation racer has plenty of laps at Jefferson and finished second two years ago.  Another driver to keep an eye on is Gabe Sommers.  Sommers like Nason is a former Rookie of the Year and point runner-up on the Tour.  Sommers has one career Tour victory, coming at State Park Speedway his Rookie season.  Making a rare Tour appearance is Brandon Hill, who has one career Tour win.  Dillon Hammond has also indicated he will return as a Touring Star in 2021, looking to build upon his two career top five performances.

Two drivers are battling for Rookie of the Year honors this season and both have a Championship winning pedigree.  Max Kahler grew up racing go-karts just down the street from Jefferson Speedway and will now return as a Kulwicki Development Driver and the 2020 Big 8 Late Model Series Champion.  Kahler wowed the crowd last year, winning the National Short Track Championships at Rockford Speedway in the closing laps, scooting past Dale Nottestad.  Meanwhile, the 2019 Midwest Truck Series Champion Levon VanDerGeest has now turned his attention to Super Late Models.  Becoming the youngest winner in the history of the Milwaukee Mile two seasons ago, VanDerGeest has turned many heads in his young career.

Three drivers will look to make their first career ARCA Midwest Tour starts on Saturday night and all three have a proven track record at Jefferson.  Finishing second last Saturday night, Riley Stenjem, the 2018 Jefferson Rookie of the Year and the winner of two out of three Wisconsin State Championship features in 2019, is set to climb behind the wheel of his Super Late Model.  The Super Late Model Jefferson track record holder has also filed an entry for the ‘Salute the Troops 100’ as Jordan Devoy makes his first Tour appearance.  Luke Westenberg has multiple Late Model victories at Jefferson and will now try his hand in the Midwest Tour at his home track.

Amassing 14 wins and two track Championships in 2020, there was no driver that won more in the region than Justin Mondeik.  Mondeik leads a host of Champions into Saturday night including a pair of Lake Geneva Raceway Champions Jamie Wallace and Russ Blakely, a pair of Wisconsin Challenge Series Champions in Ryan Farrell and John Beale and three-time Fox River Racing Club Late Model Champion Braison Bennett.

Joining the ‘Stars and Cars’ of the ARCA Midwest Tour will be the Hobby Stocks and Bandit Spectacular.  Spectator gates open at 3pm, qualifying is slated for 5pm with the first race at 7pm.  Adult general admission tickets are $20, Seniors, Military and Students are $15, Kids ages 8-11 are $7 with ages under 8 admitted free.

All active and retired military will again be invited onto the track prior to the ‘Salute the Troops 100’ for driver introductions and to give the command to start the engines.  Jefferson Speedway is located between Cambridge and Jefferson on Highway 18.  For additional information visit www.jeffersonspeedway.com or www.midwesttour.racing

BROOKS SHINES IN SHOWDOWN AT JEFFERSON