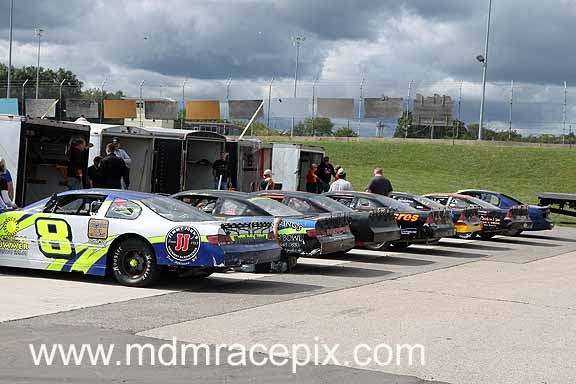 JEFFERSON, WI (Saturday, July 27, 2013) Dale Nottestad of Cambridge captured his fourth feature victory of the season as he charged to the front of the field and won the Cambridge Auto Repair and Sales 50 lap Late Model main event on Saturday night. The win also allowed Nottestad to close the gap in the standings on current point leader Zack Riddle. After the evening’s action, Riddle owns only a four point advantage over Nottestad in the chase for the 2013 championship.

Tyler Peterson and Chad Stevens led the field to green with Peterson taking the initial lead exiting turn two on the opening lap. Stevens fell back into a battle for second with Tory Bagley as Peterson quickly began to slip out to a healthy advantage. Bagley continued to challenge Stevens lap after lap with Dylan Schuyler moving up to watch them from fourth. Bagley eventually claimed the second spot on lap 17 with Schuyler trying to follow past Stevens. Just before the half way point of the race, the first of two cautions slowed the pace and erased Peterson’s large lead. Bagley filled Peterson’s rear view mirror on the restart with Schuyler now in third and Shaun Scheel fourth. As racing resumed, Nottestad charged into the top five, following Scheel past Schuyler as they moved into third and fourth respectively. Nottestad slipped by Scheel just before the second and final caution waved on lap 36. Once racing restarted, Nottestad made his move, quickly driving around the high side of Bagley and into second. Nottestad set his sights on Peterson who had led since lap one. With nine laps remaining, Nottestad drove under Peterson entering turn one. Nottestad gained the advantage down the backstretch and cleared for the top spot exiting turn four on the same lap. Now with the lead, Nottestad drove away from the field on his way to the checkers for the win. Peterson finished second as he held off a hard charging Kyle Jarlsberg in third. Bagley and Riddle completed the top five.

Sun Prairie’s Jason Dunn broke a string of bad luck to open the season by breaking through and winning the 20 lap Sportsman main event. Starting on the outside of row one, Dunn grabbed control of the top spot on lap two with pole sitter Seth Lootans falling into second and Jim Taylor third. Mark Deporter joined the top three as he battled with Taylor while point leader Jim Tate Jr watched from fifth. Deporter took over the third spot on lap seven with Tate in tow. Deporter claimed second at the midway point of the race as Tate continued to follow him through traffic. Deporter pulled up behind Dunn on the point as he began to search for a way past the leader. With two laps to go, Tate got a good run on the low side of Deporter as they fought for second behind Dunn. Tate claimed second on the final lap and looked to pressure Dunn for the lead. But Dunn stayed strong out front to cross the stripe first and pick up his first feature of the season. Tate was second followed by Deporter, Jason Thoma and Robert Hansberry.

Joe Cross of Sun Prairie got to the front early and hung on to win the 20 lap International feature event. Dylan Buckingham led lap one from the front row with Cross already up to second. An early caution on lap two allowed Cross to restart right on the rear bumper of Buckingham with Merek Pankow in third. As racing resumed, Cross dove under Buckingham entering turn one. Cross cleared for the lead a lap later and immediately began to stretch his advantage while Seth Reamer moved up to challenge Buckingham for second. Reamer finally claimed the runner up spot on lap 11 with Mike Lambert in tow for third. A caution with five laps remaining erased the large lead that Cross was enjoying and allowed Reamer to close in for the restart. But Cross held Reamer at bay over the final circuits to see the checkers first for the win. Reamer was second with Lambert, Jamie Shelley and Casey Strese rounding out the top five.

Bobby Selsing Jr of Edgerton increased his lead in the standings by claiming the 25 lap Hobby Stock main event. Scott Riemer and Jeff LeFave paced the field to green with LeFave leading early. Riemer battled back on lap two to take over the top spot with Anthony Lloyd following into second. On lap four, Lloyd grabbed control of the lead with Lucas Buckingham following into second past Riemer. Selsing made his way past Riemer as well on lap seven and continued forward alongside Buckingham a lap later. Selsing cleared for second and set his sights on Lloyd at the front. On lap nine, Selsing charged under Lloyd entering turn three and cleared for the position as they exited turn four. Selsing drove out to a big lead while Dustin Ward made his way through the leaders and up to second on lap 12. But Selsing’s lead was too large to overcome as he cruised to the checkers to get the win. Ward settled for second followed by Buckingham, James Helmer and Tony Ciano.

In Road Warrior action, it was Bill Reynolds of Watertown coming home victorious in the 20 lap feature event. Jordan Lamb and Jared Larson brought the field to the green flag as they made up row one. Rodger Stephenson made it a three way battle for first on the opening lap as they raced down the backstretch. Stephenson emerged as the leader on lap two with Reynolds already up alongside Lamb fighting for second. Reynolds claimed the second spot on lap five as he began to reel in Stephenson at the front. Reynolds began to peek to the low side of the leader on lap eight, drawing even with Stephenson for the top spot with Chris Gottschalk watching from third. Lap after lap, Reynolds and Stephenson battled side by side with each looking to gain the advantage. On the final lap, Reynolds got a good run exiting turn four as he rode his momentum past the checkered flag with a slight advantage over Stephenson for the win. Gottschalk finished third followed by Tim Ellis and Bill Sweeney.

Dennis Wuesthoff of Beaver Dam claimed his first career feature win by claiming the 20 lap Bandit main event. Matt Rusch and Tyler Deporter led the field to green as they made contact through turns one and two. As they both checked up to maintain control, Wuesthoff fired past into the lead followed by Noah Pankow and Josh Lenz. After two early caution periods, Wuesthoff continued to show the way with Nick Schmidt now up to second. Schmidt drove to the high side looking to steal the top spot away from Wuesthoff. But Wuesthoff held off his advances to remain on the point while Derek Dixon moved up to third. Dixon slipped past Schmidt on the final lap, but didn’t have enough to bet by Wuesthoff as he was forced to settle for second. Schmidt finished third with Lenz and Josh Marx rounding out the top five.

Next Saturday, August 3, is a full program of racing in all division highlighted by the Miller Lite 50 lap Late Model feature. Time trials begin at 5pm with racing at 7pm sharp. Jefferson Speedway is located halfway between Jefferson and Cambridge on Hwy 18. Please visit www.jeffersonspeedway.com for more information.